Durmitor and other ereas

Durmitor and other ereas

National park Durmitor encompasses area of the lake and piva Mountains, Susice River Canyon and part of the Tara Canyon.
Durmitor s the most dispersed mountain in Montenegro, a National park of 38000ha, a mountain with with over 30 peaks winter tourism in Montenegro.
It is attractive in winter; there are hotels and other tourist infrastructure which are necessary for the winter sports on lovers of intact nature.
It has 5 canyons, 18 lakes, over 1500 types of plants, even 130 types of birds. Glaciers passed this mountain and left their mark in the famous "gorsko oko" which is the mirror for hundreds of years old trees and proud peaks.
A large forest reserve is registered on Durmitor with the rare black pine tree. What is specific about Durmitor is the so called temperature inversion in the winter months, when the cold air and fog pass down to the lower parts, and the sun and warm air goes to the peaks – which makes the winter beautiful in these crags.
But , Even in summer one can find snow and ice in Velika Kalica or in the glacial caves among which the most beautiful is – Ledena Pecina (Ice Cave). 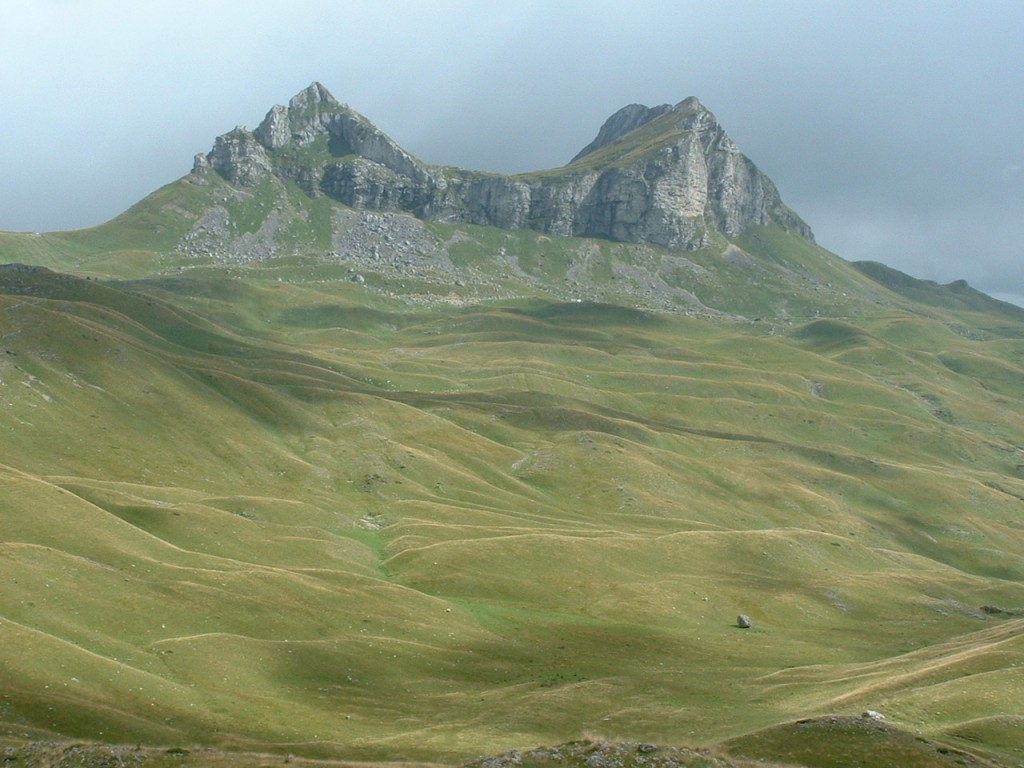 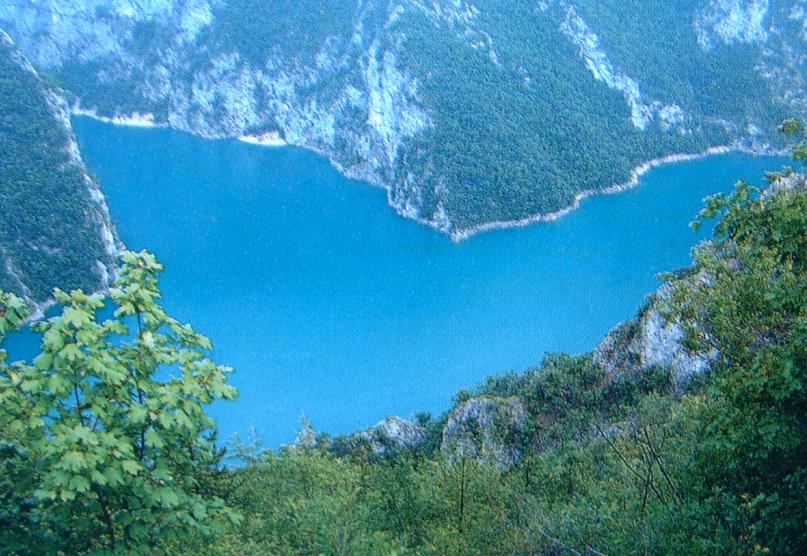 Biogradska Gora National park was founded in 1878 by King Nikola. "Kraljevske sume" (Royal Forests) spread on 5400ha.
At the very centre of the national park, under the tree tallest peak of Bjelasica, is the biogradsko Lake.
Tranquil and beautiful, strange – of a non-definable colour, simply lures to be looked at and hypnotizes with its grand appearance. It simply reminds you that with its varying water level and unsteady watercolour which mainly depends on your mood, from the amount of sun and cloudiness. It is still possible to find parts of memorial, intact and virgin clear, natural beauty. The National Park is very rich in fauna. It is a nesting place for various types of birds, game which almost freely moves without freight of people. This is the result of great respect and protection from visitors- there is no logging or poaching. 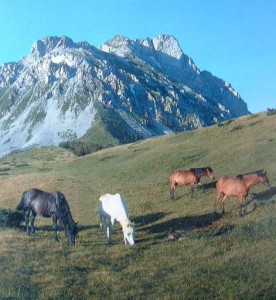 Bjelasica is a high mountain in Montenegro, near Kolasin between Lim and tara. Its highest peak is Crna Glava of 2139"n above sea leve It is very accessible and on it, on Jezerine ia a ski-centre. According to tradition, it got its name from the word "bjelasanje" (whitening) asthe snow stays until the end of May. Now the skiers have the hotel "Bjanka" in Kolasin, and a couple of smaller hotels-inns in the town, buthere are plans for restructuring and investing in the whole ski-complex. It is expected in the near future that here shall be built a real pearl of winter tourism. 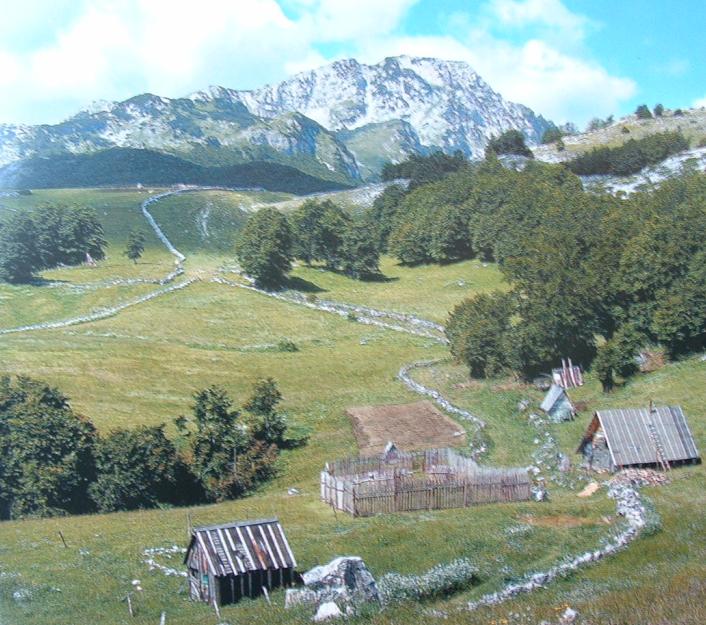 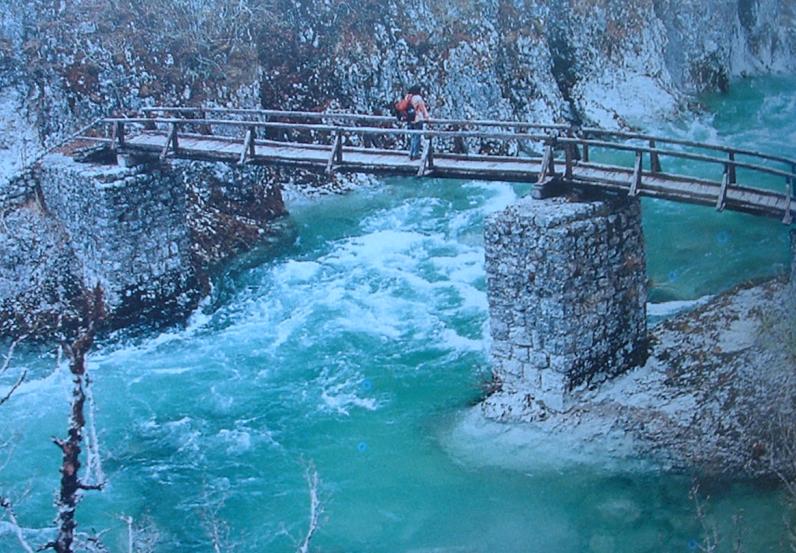 When you meet a new person, they present themselves with their name. If you wish to get to know Montenegro, if you wish to feel it, you must see the Tara Canyon. The canyon is over 140km long, the river is formed from the little mountain river Verusa and Opasanica, and ends near Scepan-polje where, with Piva River, it forms. Drina. In 1977 the Canyon was included in the ecological reserve of the biosphere of our planet within the UNESCO programme "The Man and the Biosphere", with 52 plant and 314 animal types. Fishermen are content with some specimen of trout, association to the water quality and an unforgettable Experience of Tara. The water is very fast, cold and clean. In the whole world only the Great Canyon in Colorado is larger and deeper. Tara is the "tear of Europe". At the deepest parts of the canyon the height of the rocky cliffs is over 1300m. There are no words, or pictures, no way to reach that beauty, except maybe through experiences in the wild rapids, waterfalls, cascades and whirlpools. Rafting or kayaking- whichever you choose, adrenalin will not be missing. Rafting starts from Splaviste, Motel "Radanova ruka" is the central camp. Rafting lasts for four days – depending on your time and courage. 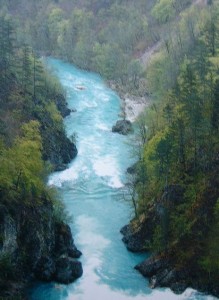 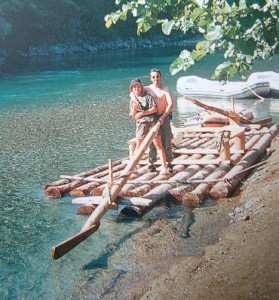 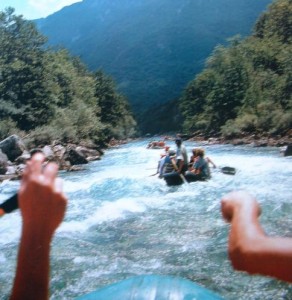 It is difficult to list everything that Skadar Lake is unique for. It is the largest lake on the Balkans; spreads through the carst field and valley. Two thirds belong to Montenegro and one third to Albania. After the spring and autumn rains, it raises and covers an area of 550km.
The average depth is 6-7m, and the deepest point is 44m at a hollow on the bottom of the lake.
The lake is of classical cryptodepression, the level is 6m under the Adriatic from which it is separated by a 7km wide Rumija Mountain. The water comes from Moraca, Crnica, Plavnica and River Crnojevica; there are over 50 wells at the very bottom of the lake. Its arm is the Bojana River. The lake water is sweet, in summer the water temperature reaches 28C, and in winter it can freeze. It is navigable, with numerouse by channels, gorges and ravines. It has over 50 islands, and the largest aree Vranjina and Lesandro. On them are the remins of ancient fortresses as well as monasteries from 14"th and 15"th Centuries such as the Beska Monastery. There is Zabljak, capital of Zeta from the Crnojevic era, on the very coast, which in the period of high precipitation becomes an island. 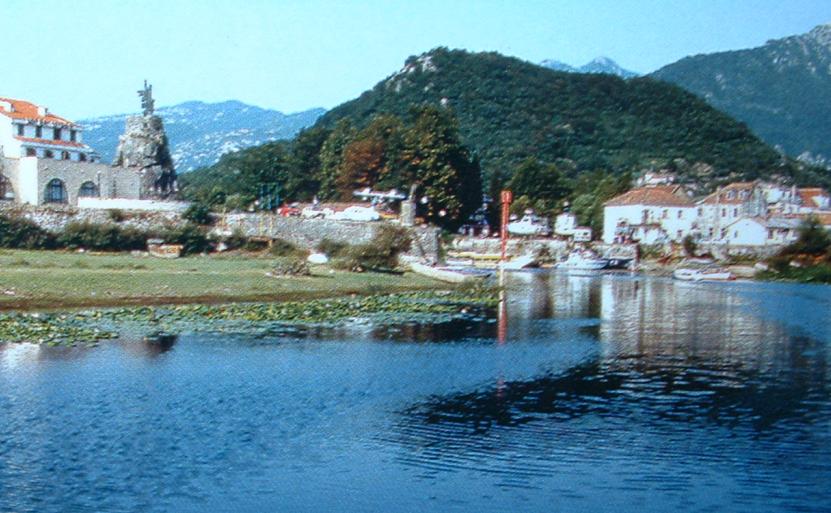 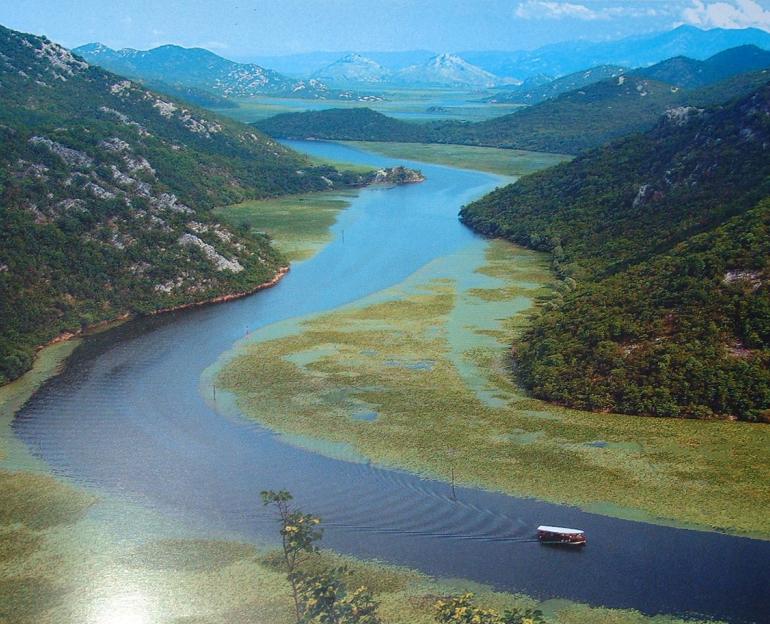 Skadar Lake was declared a National Park in 1983, with an area of 370-540km. It is a sanctuary for more than 270 types of birds such as the ibis, pochard, ducks, and gulls. It is a treasury of vast variety of fish, over 40, of which some are very rare: bleak and carp. Eveneals reach it by Bojana. The flora is also specific, very rich and diverse. It is rich and diverse. It is rich in marsh plants which can cover the coast densely and deceive the view giving the impression of a tranquil floral plain.

A small town which once used to be a trading centre in Montenegro. Nearby is the Obodska Cave, where the Crnojevica River orginates and quicklymerges with the lake. The beautiful stone bridge, built by Duke Danilo, dominates the place, and gives it the sense of the old times. Here, in 1494, printer Makarije printed the first Montenegrin book the "Oktoih", in Cyrillic, during the rule of Djuradj Crnojevic.

Moraca is the largest tributary in Montenegro with its length of 98km and the river basin area of 3200km. It originates at strong carst spring, through an impressive canyon valley and with three branches enters the Skadar Lake. It originates at 945m above sea level, and flows into the lake at only 4.5m above sea level, which makes the canyon livelier and more picturesque. Part of the canyon is called Platije where Moraca has broken the mountain forming rocky canvases. Man has invaded the sides of the canyon using it for the construction of the Belgrade-Bar railway, as well as for the road which appears and disappears the entire time, entering tunnel, as magic. Passing through the canyon it is difficult to define whose job was harder: for Moraca to break the granite rocks or for man to follow it in the campaign, and build traffic arteries full of tunnels, bridges and dangerous sections. 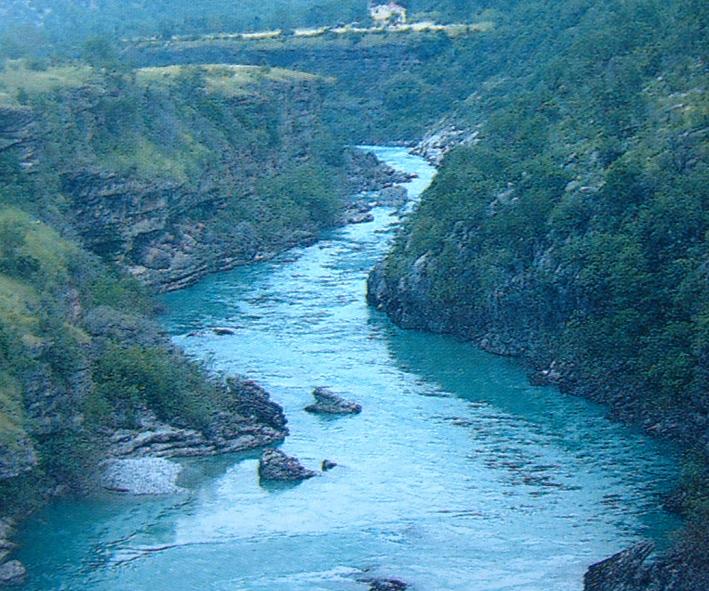 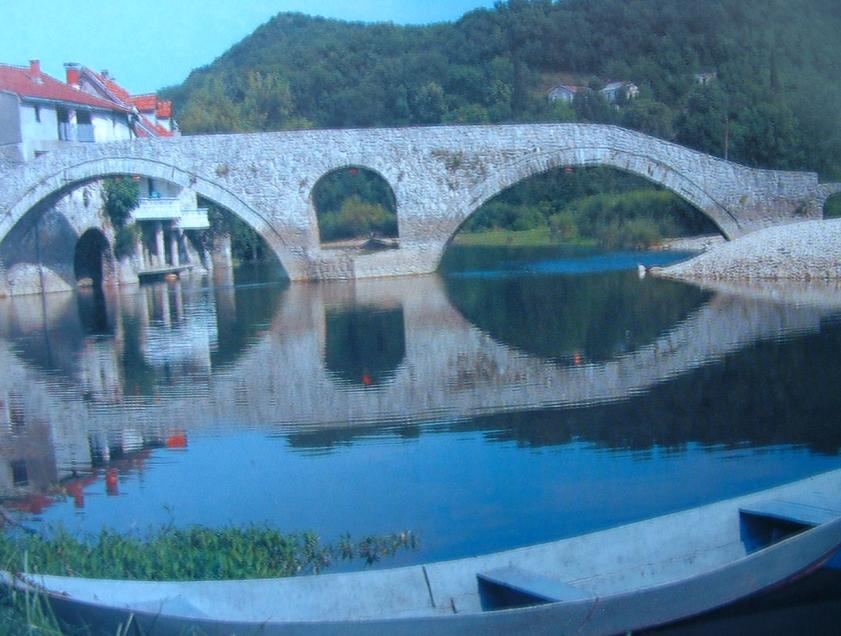 At 44km from podgorica in the Moraca Canyon is the Monastery of the sane name, built by Stefan, son of Duke Vukan, in 1252. Many times ravaged, today it shelters many old writings and icons such as the ones of St. Sava and Nemanja dating 1645 and the icon of St/ Luka from 1673. Beside the Cetinje and Ostrog, Moraca Monastery is the best known in Montenegro.

If you travel From Danilovgrad to Niksic you may visit one of the Montenegro sacred places- Ostrog Monastery. The Monastery is built in 1665 as a memorial to the Herzegovina Archbishop Vasilije Jovanovic, later declared a Saint, whose relies are put to rest here. Monastery is embedded in the rock of narrow cliffs and is part of a natural cave. The view on it takes your breath away.
S- as a dove, it is white in its beauty defiant to time, anatomy and conquerors. It consists of two churches "Vavedenje bogorodice" and "Svetog krsta" (The Holy Cross). The lower monastery is built in 1774 on a plane and was used for the needs of the upper monastery.
St. Vasilije Ostroski is the best known and respected saint in Montenegro. It is believed that his relies have healing power. Today, his body is kept in a stone chest, guarded by priests, and is worshiped not only by Christians but by other faiths as well, hence visitors from all over the world come here. The Monastery is the best known shrine (holy place) on the Balkans. For centuries people come here searching for health and faith. Leaving, they carry new faith, optimism and hope- the most valuable wordly values.

Under the peaks of Lovecen, at 680m above sea level is Cetinje, the old Montenegro capital. Cetinje was last home of Ivan Crnojevic before the arrival of Turks. Here he built a Palace in 1482, and two years later the Cetinje Monastery. Above the monastery is the Tabalj Tower, and on the city square the enforced Biljarda Palace. Of the significant buildings on Cetinje it is a must to mention the Palace of King Nikola and the street where the diplomatic seats of great power were located. From the place where the Njegos Mausoleum is situated there is a view of Cetinje, Boka Kotorska and Njegust, village where Njegos was born. Njegos Museum is in the village, Palace of King Nikola and numerous curing spots where the famous "njeguski prsut" (specially treated smoked meat) is smoked (cured).

Lovcen is coastal, Dinaric Mountain, one of National Parks of Montenegro. The highest peaks are Stirovnik (1749m) and Jezerski peak (1657m). Under Lovcen are the Cetinje field, vast valleys and hollows.
There is a great view on to the Boka kotorka Gulf from one side, and the Dinara carst on the other. One should visit "Ivanova korita" with the mountain house "Lovcen" as well as the Njegusi village birthplace of Prtar Petrvic. When you conquer al32 serpentines you arrive to the unreal; there is the Njegos Mausoleum, built by the project of sculptor Ivan Mestrovic. It is a landmark of proud Montenegrins to their Bishop and poet- but also an ode to immortality. It is a holy place for these highland people, the merger of two giants Lovcen and the Bishop where sky and earth unite.
The verses of "Gorski vijenac" just pour out…